A few days since my last update, and have there been any changes.

Well only this little thing….. 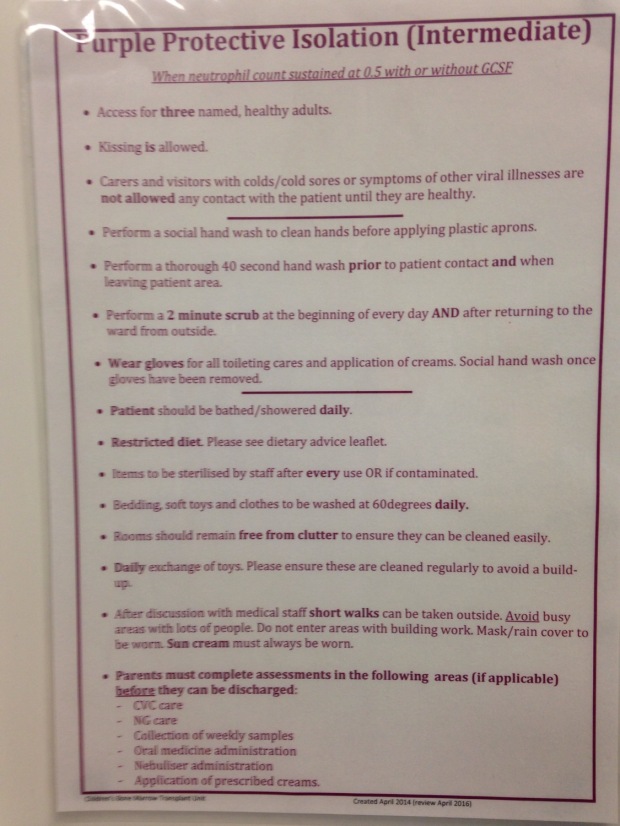 Yes – Seth has been dropped from RED isolation to Purple.

As you can see the rules on cleanliness are still strict. But we can give him kisses and don’t have to curb our arms as much. He has not been allowed outside yet because he is still on oxygen and still on pain relief 24 hours a day.

It’s good, the Neutrophils are still rising but they have slowed down a lot. We are now at 1.87. Which is 1.86 more than he has had this year!!! On Saturday blood was taken to send away to test the new cells and see if the graft is Nik’s – we hope that it is. If the cells are Seth’s or the previous graft then his marrow has rejected this transplant. However, the way things are going at the moment that is looking highly unlikely.

the difference in his hands over the past 10 days – starting to breakdown, at their worst, and now, getting better.

They are starting to get better. Now he has an anaesthetist come up when he is having his dressing changed who basically gives him Ketamine and Midazolam as needed. Last time he had quite a large amount. But it meant we could clean his hands and get some of the dead skin off lowering the risk of infection. Afterwards he  was a bit out of it and at one point was laughing at me because i had 3 eyes and looked like an Alien. The hands are definitely beginning to heel. New skin is present, so its just time.

Lungs: Seth is still needing Oxygen. However, we are now weaning him off it a little each day. At his highest requirement he was on 2l of Oxygen. Now he is on 0.2 during the day and 0.4 when asleep. This is good news as it suggests that the new immune system is not currently causing problems in his lungs, and it is another step closer to getting through this.

Everything at the moment appears to be going in the right direction. Doctors are cautiously happy with his progress so far. To date he has exceeded all our expectations with his strength and his little personality is back in full swing. He even started having school lessons again this week! 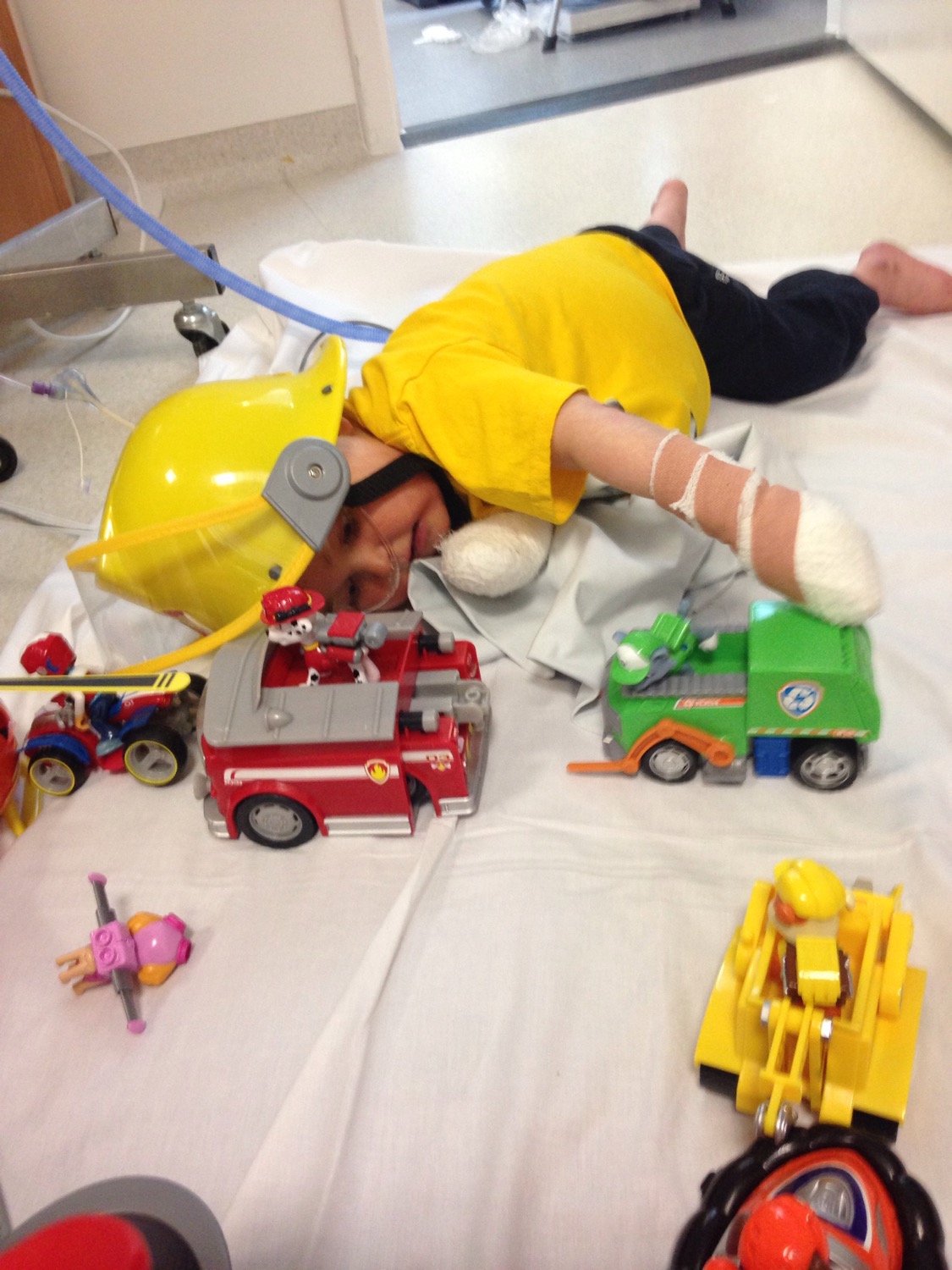 insisting on playing even though it really is exhausting 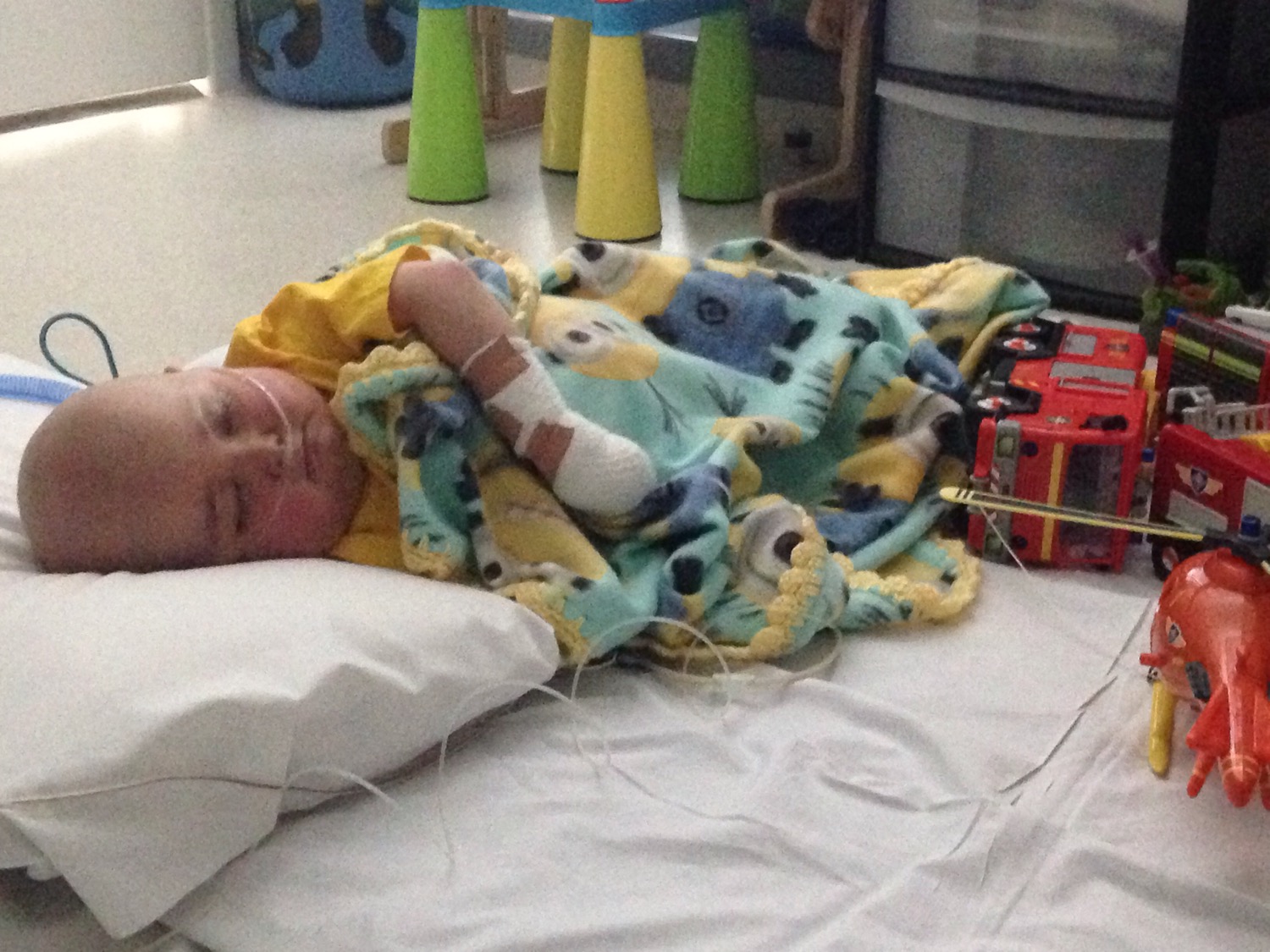 But, i am sure other BMT parents will know – especially those embarking on a second or third transplant – that when things go well you want to relax but can’t. At the moment we have to wait and see everyday if anything changes. We have another 6 is weeks before we can start to relax a little because until then we worry about the new graft causing problems with his breathing, his liver, or GVHD. Even when that time has past we have until day 120 (or there about) to wait and see if Seth’s thymus is still working. If it is not although his bone marrow will be producing baby t cells, his thymus won’t be educating them so they will not work. As Seth had Graft Versus Host Disease for so long it is a worry that his Thymus may not be working. Which will mean a Thymic transplant.

Then there is the ongoing worry about him picking up an infection. Yes his immunity is better than it was but he is still quite a way below the normal range and what he has will not be working as effective as a normal immune system. These are all things that we just have to wait and see what happens day by day.