Another day closer and this morning I had a 7.15am FaceTime chat with Seth who was bright as a button and wanted to complain that Daddy was trying to get him to go back to sleep by saying it was not morning! Unfortunately Daddy slipped up when he said Good Morning to the cleaner – Seth does not miss a trick!! Seth was also very excited to tell me that he had not had one temperature over night. He had needed Oxygen throughout the night, but other than that his presentation was great!

Bloods today also showed some improvement, better liver function and the infection marker in his blood was the same – so atlas it had not gone up!

Today Seth has been up and about playing, making fire engines out of lego, and at one point Adventure Bay (Paw Patrol) and Pontypandy (Fireman Sam) came together to stop Teenage Mutant Turtle Raphael kidnapping Dilys (off Fireman Sam).  O the drama!

Paw Patrol and Fireman Sam save the day! 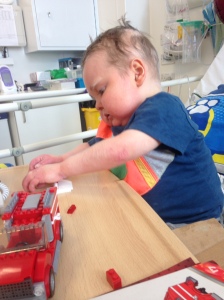 Concentrating on the lego fire engine!

AND this afternoon he declared “I am hungry” and ordered a bowl of macaroni cheese. We thought he would have one piece and leave the rest as he would normally. Nik said to him that for every piece of pasta he ate he could pull a sticker of his arm (Seth finds this very amusing!) – half an hour later he had finished the bowl!!!

All finished! Get those stickers Daddy!!! 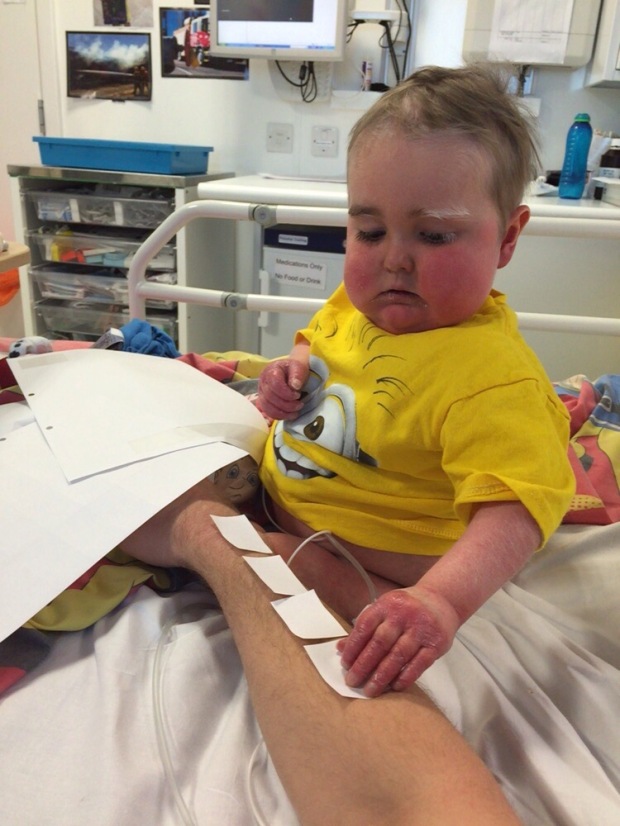 So today Seth has been an entirely different child and back to his normal happy self. Who knows what will happen over the next 24 hours. But at least he has had a bit of a break from feeling rubbish today. 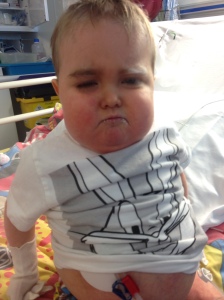 Pulling his pretend grumpy face because he has to have a bath!

Pulling Faces with Mummy and Daddy. We both got to visit him for a short time whilst Nik’s dad took Hugo for a walk.

Transplant wise we are continuing with the protocol and today was day 3 of Treosulfan and day 2 of Fludarabine. Today Nik started GCSF injections to make his bone marrow produce more cells in preparation for harvesting on Thursday. Feedback from Nik was that it stung a little….. I am sure he will cope!

Now the chemo has started we are doing what we can to reduce the side effects, such as bathing him 3 times a day and making sure his skin and mouth are cleaned regularly. However, the chemo will cause sickness and hair loss among other things, which are likely to start about a week after chemo has finished. I am ok with the hair loss, it is part of the programme and it will grow back. But i will miss his eyelashes! They are amazing and i don’t know if they will grow back the same!!!