So my last post detailed my concerns about the return of some of Seth’s immune system (t cells). We have now spoken with Seth’s consultant who agrees with us – this graft is unstable. It is going to be better for Seth to get rid of it and start again. Even though it is dangerous the years of steroids and problems with this graft are taking its toll on his body. So its time for that graft to get out!!!

This week the plan was to remove Seth’s gallbladder because of a large gallstone that has been causing problems. This happened on Tuesday and whilst he was under he had his PEG changed to a button. The PEG is a tube going from the inside of his stomach, through the stomach wall and out of his belly that milk and medicine can be put down. Seth has a very poor appetite so we need this to help him put weight on. The button changes the tube into a shorter tube that stops at his skin. It is more hygienic and doesn’t dangle down so won’t get caught on things.

The gallbladder removal went well and they were able to do it via keyhole surgery. Afterwards he was in a lot of pain (which is always difficult to judge with Seth as he doesn’t complain, but when he tried to move he cried so we know it hurts a lot) as such he had morphine to help him manage the pain and get some sleep. The day after his surgery we were surprised at how Ok he was. He was his normal self, sore and needed a morphine bolus when we carried him to the toilet, but he was sat up in bed playing paw patrol and fireman sam. The day after however, he was very sore and did not want to sit up or move at all, he slept a lot and they had to increase his morphine. By the Friday, however, he had perked up again. He had a wound at the bottom of his belly (similar place to a c section scar) which started oozing. This made Nik and I worry as our first thought was INFECTION. However, the surgeon came to see him and was very pleased with the wound. Leaking is expected apparently because it is a high pressure wound and as long as it is dressed properly and kept clean it is fine.

Seth has now been moved into the room he will be transplanted in this room his smaller than his previous rooms (no reason – just how it is) and it has a blue line on the floor. Inside the blue line is the “clean” area. Above Seth’s bed is an air system. It pushes air down onto Seth’s bed. Vents in the corner of the room suck air out. So the air inside the line is filtered and clean. Outside the line is where the dirty air is pushed to.  So this means that he can have visitors – as long as they are well and do not enter the area within the line.

The blue line that keeps Seth safe, and the rules of RED isolation.

As a result of the move we are now in RED management and will be so until he has neutrophils post transplant (approximately 10 days to 3 weeks after transplant we should see him having neutrophils). At that point he will go down to PURPLE management and be allowed out (wearing a mask).

This week two other families on the ward have children that have now got neutrophils after transplant. This is brilliant You spend a lot of time on the ward and although you never meet the children, you feel like you know them. You spend a lot of time with their parents and asking after their welfare. It is brilliant to see things going well. But at the same time you have a pang of sadness wishing to be in their position. So much could happen in between now and then, we may never get there.

I had a brief conversation with Seth’s consultant on Sunday and he is very happy with Seth’s progress so far. A CT scan last week showed the infection we were worried about has gone – so what the doctors are doing so far is working. Ideally they would like to transplant tomorrow – as soon as possible. But it is not safe to do so whilst he is still healing from the operation. Chemotherapy could cause the wounds to re-open, which could be devastating. So it is a fine balance rather than best case. Were hoping he will heal well and we will be able to start chemo in 3 weeks. But that is entirely dependent on Seth’s recovery. We have had so many twists and turns over the years we take everything day by day. Never look to tomorrow – things could be entirely different and that leads to disappointment.

When it is time to transplant Nik and I have to give consent, at which time we will be told in the ins and outs of chemotherapy and the risks. We know that these will be scary. But we have no choice. We do this or we definitely lose our boy. This gives him a chance. We know that Seth has extensive damage to his lungs from the lung infection i spoke about here. Chemotherapy may cause issues here, this may be a problem, he may struggle and need assistance to breathe. We have to be ready for that. We hope it doesn’t, but we have to be prepared.

On a lighter note during this conversation we spoke about Graft Versus Host Disease, which we have been battling for 4 and a half years and lead to where we are today. Research indicates that a T cell depleted transplant carries a low risk of Graft Versus Host Disease. Seth’s chances are higher because he has had it before, but even so they are still very low.

My mum and step-dad came to visit this weekend, they spent time with Seth (only my mum was allowed to touch him as she is the 4th carer. My step-dad was allowed in the room but had to sit in the dirty area and was not allowed to touch anything.). They also took Hugo for a while so that Nik and I could be in Seth’s room at the same time – which was weird AND BRILLIANT! I really can’t wait for the day that Hugo can be there too.

New bedding sent to him. He LOVES it!!!

Crafts! (he thinks it is fantastic that he is now allowed to use scissors)

Easter Eggs! All donated to the ward by kind people….Seth does not like chocolate though so……..

Playing with Paw Patrol pups and showing off his new hair cut!

the certificates he is given when he has to have something done that isn’t nice, or he does something that we want him to do like eat.

We have started a timetable (awful pic because i decided to put it on the window). This really works for Seth, he loves it and at snack time he actually ate (it was one carrot – but thats the most he has eaten in weeks!)

After the overwhelming success of #wearyellowforseth we have started to decorate his room…. 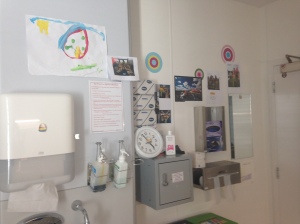 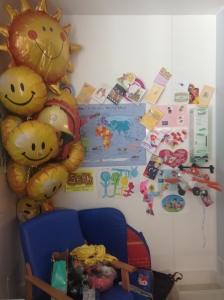 So that is where we are – no we wait and take each day as it comes. We wait.

52 thoughts on “Today: That boy just gets more amazing…..”