10 days since my last “Today” update, so…whats been happening?!

In my last post on Seth’s birthday he spiked a temp and became quite unwell. This continued for the rest of that week with him getting a bit better and then a bit worse. I’d noticed on the Sunday (the day before his birthday) he was looking a bit yellow. But his liver function and billirubin (a brownish yellow substance formed in the liver from the breakdown of red blood cells, this level being high can indicate liver related illness) levels were normal. However, as he became more ill his bloods were showing that his liver function was getting worse and his billirubin levels were getting higher. This is not what we wanted to see. The doctors ordered an ultrasound and for once we had better news than we’d feared (hu-bloody-rah!), instead of there being an issue with his liver, he has gallstones. It appears that one of these gallstones has passed into a duct leading from the gallbladder and caused a blockage. Meaning that the liver wasn’t flushing properly.

Not a problem right?….well normally no, but we all know Seth doesn’t follow convention!  Because we are heading towards a second bone marrow transplant it could be a problem post transplant. As such the doctors want his gallbladder removed. For those not sure, your gallbladder is a little storage pouch for enzymes that breakdown food. So when your hungry the liver sends enzymes to the gallbladder and they build up there, then when you eat the gallbladder sends them off to do their job. Without a gallbladder the liver will still send the enzymes, but rather than them being stored they will just continue on their merry way.

Unfortunately because he had issues with his gallbladder recently, its now inflamed. This means that if they were to take it out now they would have to make an incision rather than keyhole and its a much more risky surgery. Therefore, the surgeons would normally wait 6 weeks. But we don’t have 6 weeks so its been agreed for in 2 weeks time. He needs time to heal before he begins chemo, so transplant will now be a minimum of 6 weeks away.

6 weeks isn’t that long when you have an immune system, but when you don’t it’s potentially a lifetime. At the minute Seth has no neutrophils, so he has no white cells in which to fight infection, also his lymphocyte count is low, so he has no immune system at all. The only protection he has from an infection is antibiotics and the preventative medication such as anti fungal drugs and anti viral drugs. At the minute he is well. But he has an area of infection in his lung which appears to be bacterial and fungal. This is currently being controlled by antibiotics. But fungal chest infections are incredibly difficult to manage without an immune system. Furthermore, antibiotics don’t work against viral infections. If he picks up one of these at the minute he has no protection.

To help him out a bit he has a transfusion once a day for 5 days of buffy coat (this is part of the blood that contains white blood cells – neutrophils  and platelets. The lab spin the blood to separate it out). These cells don’t last, they go in, fight infection and die. So offer no longer term protection.

The last 4 or 5 days Seth has really started to be his cheeky self again, and started eating! Garlic bread appears to be his food of choice at the minute and he has it for breakfast, lunch and tea. Thankfully he also adds broccoli and carrots (dipped in gravy) and sausages. Yesterday he had 5 sausages!!! Its probably the increased dose of steroids he’s been having, but its good to see him eat for once!

We have been given a book to read with Seth that is written to explain to him what is going to happen with the transplant. Its a really good book! We’ve also been given the ward protocol for the transplant. In this is all the rules we must follow to give Seth the best chance of getting through this. 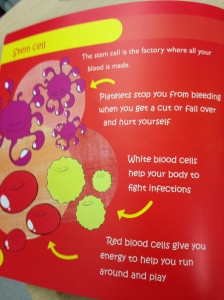 A great basic explanation of the immune system 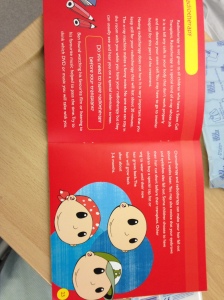 Helping him prepare for the effects of chemo

The manual to keeping the boy alive

This week I have been able to spend a bit of time each day with Seth. Its difficult for a few reasons: Nik has to work and, as such, can’t really be taking Hugo (our 4 month old) much during his working day; Hugo is breastfed (which we’re continuing not only because of the benefits for him but because of the cost of formula which is money better spent on other things at the moment, but also the ease of being able to be at the hospital when I need to and not worry about having a clean bottle for Hugo); and attempting to keep Hugo in some kind of routine so trying to get him bathed at 6pm and in bed by 7 as he would at home. So it tends to work that Hugo and I go over in the morning when Seth wakes and I pop in to say hello and give him a cuddle. Hugo and I then wander round Newcastle city centre for a few hours and then we return and I visit Seth for about an hour, then I visit him again at about 4pm for an hour and  a half before I take Hugo back to the accommodation to get him to bed. At the weekends, it works bit better as I spend all the day with Seth and just come out of his room to feed Hugo. It means that Nik gets to continue his relationship with Hugo as well.

Spending time with the boy

Seth isn’t allowed to have any contact with Hugo, as the risk of an infection is too great. Hugo isn’t allowed on the ward. But this week Seth was allowed in the airlock entrance part office room to look through the window to see Hugo who was the other side of the ward door. It made his day! I’ve never seen such a big smile on him!

The highlight of Seth’s week – seeing his baby brother

Bone Marrow Transplants at Newcastle Hospital are supported by The Bubble Foundation. As part of this they support accommodation for the parents or families of children undergoing Bone Marrow Transplants at the hospital. This is a small flat where you get your own living room, bedroom and share a kitchen, toilet and shower room with another family. The flat is basic, and not homely or welcoming. But it is clean and has everything you need. At the end of the day it isn’t home, but its a resource that makes all of this a lot easier. It means Hugo and I can stay close by, so that I can have my visits and if something goes wrong I can be at the hospital in 10 minutes, not 4 hours as it would be if i was at home.

The living room of our BMT flat. Hugo and my home until we get discharged from the ward. (excuse the mess we’d just arrived!)

10 thoughts on “Today: How much can happen in a week… i mean really?!”